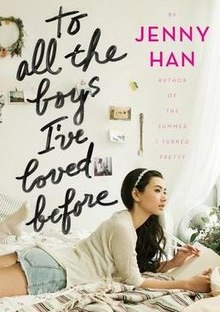 To All the Boys I’ve Loved Before by Jenny Han

This is not something I would have expected to enjoy, because when I tried reading this a before this year, I never got past the first page. I was never in the mood, especially because the writing style is not at the level of writing that I usually read. That being said, I was pleasantly surprised this time because I actually knew what the book was about! This wasn’t a book I could go into blindly, and the trailer for the Netflix movie really had me interested!

It had my favorite trope and it was generally really cute! This book is about a girl named Lara Jean who writes love letters to boys that she’s fallen in love with so she can get over them. But, of course, the letters get out (*gasp*) and she has to deal with the consequences. It was just really entertaining and funny to see her reaction and how the story progressed! Of course, it was cheesy, but I was prepared for that and honestly I was in just the right mood for it to be adorable!

I thought the characters were really great (though Josh, I felt like, could be fleshed out more. He was just there for the plot, but then again… that’s kind of the point?) and I really related to the family dynamics. I’m also really close to my sisters and it was refreshing to see that because I’ve noticed in a lot of YA stories, family issues seem to be a common theme.

Though, as I’ve said before, this was a little childish (the writing style was just younger than what I’m used to, but it was meant for a younger audience so that’s just my personal preference). I rated this a little 3.5 because I would recommend this to people, but with a disclaimer about the rom-com style cheesiness and style.

I liked the ending a lot just because it added that little element of wonder and a bit of frustration because it wasn’t <i>quite</i> a cliffhanger, but open enough to want you reading more (and I totally started the sequel immediately!). If you’re a fan of Ally Carter or Sarah Dessen or want something light, fluffy, funny and cute, this is the right choice!

MS. MARVEL EPISODE 4 THOUGHTS (featuring casual Kamala Khan daydreaming cosplay hehe)
What do you do with your pins if you have any? I usually keep them safe and sound in my library on their hoops but when I went to florida I took some with me and now I’m scared to take any because I lost my WHTF compass one that Neelam gifted me 😭🫠
“Hey, that book looks cute, what’s —“
#currentlyreading ? I’m still in the process of re reading Jade War because I want to read Jade Legacy but also I’M TERRIFIED.