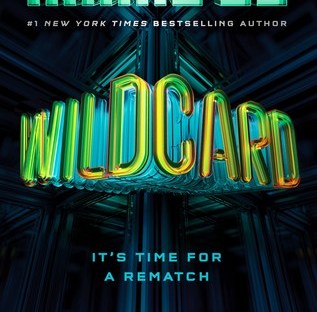 So obviously Spoilers for Warcross (check out my review for that as well!) because DANG that ending really left us gasping for air, amiright? Marie Lu really knows how to pull a Hans (yes, from Frozen…) but also still have us rooting for him. I did not expect to end up rotting for Hideo after that stunt he pulled at the end of Warcross. I mean, mind control??? CRAZY. Did not expect that AT ALL.

So Wildcard picks up right after Warcross where Hideo has his new algorithm (you know the crazy mind control one? Yeah. That one.) up and running. And of course, nobody knows about it except Hideo and his team, plus Emika and the Phoenix Riders… and Zero. Things get messy when Zero convinces Emika to join him to stop Hideo’s algorithm before the beta lenses (like the one Emika and the gang have) get updated and the whole world is under Hideo’s control. The mystery and suspense is so well done, somehow Marie Lu still manages to catch off guard and have me screaming throughout the book!

Emika Chen is as fierce as ever (maybe even MORE somehow) and I just love seeing some growth! I also just really enjoyed seeing the backstories with the different characters. I don’t want to spoil anything, so I’ll basically just leave it at that. We really get to see a different side to all the characters, and even the new ones are so interesting!

I even liked Hideo??? Somehow??? I mean, like he was a great character in the first book up until he decided to be evil and control minds. But throughout this, I still found myself sympathizing with him! I loved that!

I loved the twists and turns and the adventure! It truly kept me on my toes and I couldn’t figure out what was happening! There were multiple points throughout that had me gasping out loud (especially one point in particular haha)! Overall, I really enjoyed the story!

The only reason I rated it 4 instead of 5 was because of the ending. It was executed very cleanly, but afterwards, I didn’t feel like it was as hyped as I felt while actually reading the book. I didn’t feel the thrill or the hangover like I usually do. However, Marie Lu did a great job tying up the ends with a beautiful bow! And I wish there was more!!!!

I would recommend this to anyone who likes video games, adventure, mystery, and having really complicated feelings about fictional guys who may or may not be villains??? If you like morally gray characters, strong and powerful women, and lots of feelings, this is for you!

Books I want to read before the end of the year!
Stars5 to save on @faecrate past items and subscriptions! I LOVE the way we get matching art with the books of the month like… double gorgeousness! I recently got my exclusive Venom Dark and Sweet to match the Magic Steeped in Poison! I’m so excited to read them!
If you haven’t read The Luminaries by Susan Dennard yet what are you doing???? It has mysterious creatures and a fun action packed adventure with some mystery and a little romance!
What are you #currentlyreading ? I started this at Barnes and Noble today but I’m waiting to buy it because I’m on a ban 🤡 (the only way I can get a book is if I unhaul books on pangobooks and use that money 🫡)