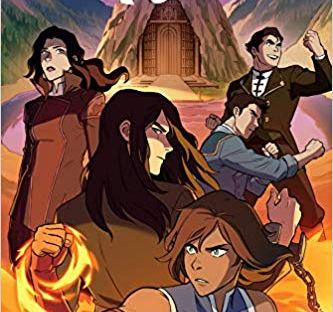 SO I got really excited when I saw Ruins of the Empire on edelweiss+ so I immediately requested it and received it and after that I realized it was a sequel to the Turf Wars so I got that too so here’s my fangirling over Legend of Korra!

So if y’all don’t know, Avatar: the Last Airbender (aka: one the greatest animated television shows to ever be created) got a spinoff show a few years ago that featured a female avatar named Korra! She’s stubborn (kind of annoying) and super kick-butt! And at the end of the series (SPOILERS, I GUESS?), Korra basically comes out and decides to go on vacation to the spirit world with Asami.

So this three part story takes place after that! It explores the new shift of balance between the spirit world and the outside world as well as the shifting politics. AND it develops Korra and Asami’s relationship! Although Korra is a bit frustrating at times, I just really loved that she isn’t perfect (like.. by a long shot) and she still has so much to learn and grow!

It really just felt like a continuation of the TV series, which is exactly what I wanted! I loved diving back into the world and following the beloved characters (Bolin is hilarious and I love him with all my heart okay?).

ALSO, I forgot how much I enjoyed Zhu Li’s character! Like after I read these I really wanted to go re-watch the show!!! Why did it have to end???? *gross sobs* (but also, since this the official continuation of the series, I am HERE FOR IT ALL)

NOW ONTO THE NEXT PART:

Ruins of the Empire obviously continues where Turf Wars left off! Kuvira is back!!! oH MY GOSH. AND THERE ARE ELECTIONS! (Zhu Li for president 2k19, I’m ready!)

This was so fun because of all of the above reasons! I loved the politics (strangely enough) and I really enjoyed the banter and the characters (also, it still felt like I was just watching the show, which made it all the more entertaining!)

I can’t wait to see what comes next for all my faves!

Have you watched this series? What about ATLA? IF NOT… GO WATCH IT SOMEHOW I PROMISE IT’S THE GREATEST!

3 thoughts on “Legend of Korra: Turf Wars #1-3 and Ruins of the Empire Part One!”

Thanks to @salaamreads for the copy of We’re in This Together by @lsarsour ! This was a YA adaptation of We Are Not Here to be Bystanders. This memoir from Palestinian American Linda Sarsour talked about early American life leading up to events that made Linda who she is today. I definitely cried at one point reading this.
Graceling #FNCBookClub discussion part one! We’re gonna be talking about the first 11 chapters! And be sure to tune into @toshsbookcorner ‘s discussion next week! (Also you can use my code STARS10 to save on @firenationcreations candles like this Kyoshi Warrior one with art by @dianadworak )
What are you #currentlyreading ? I finished Night of the Raven Dawn of the Dove last night so I’m hoping to get through this novella today! I’m only five pages in and it’s already perfect fluff 😭 I got this at yallfest and I’m so excited!!!! Anyway, hey simonteen I’d love it if you added me to your influencer list 🫡
Characters/Books I definitely hate because of these very obvious not at all joke reasons 😡